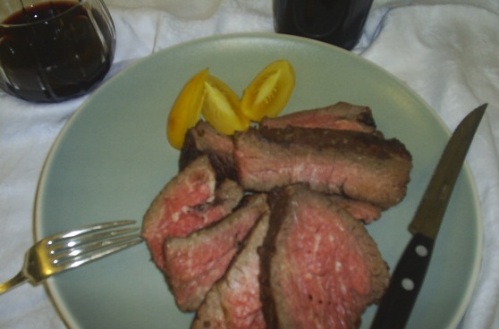 For years, I had been using one tried-and-true marinade for flank steak, but then I saw this recipe in The Junior League Centennial Cookbook. It sounded interesting, and I had all the ingredients, so I thought I would give it a try on some tri-tip for a dinner with good friends this past spring.

Since then, I have made it several times with the following modifications: The original recipe called for soy sauce, but I always use a low-sodium variety; and I have never tried it with the recipe’s suggested celery seed or dill, but I like adding green onions.

I prepared this for a recent party (where the photo above was taken), and I had a bag of limes in the refrigerator, but no lemons, so I used lime instead of lemon juice. I didn’t notice the difference, and the guests all loved it. I served it with a spinach salad with blueberries and almonds, grilled zucchini, grilled green beans, and ribs—but it would also taste great with Quinoa Salad, for which I’ll post a recipe later this week.

Place tri-tip steak in a dish or a zip-lock bag, pour the marinade over it, cover or seal tightly, and let stand in the refrigerator for at least 2 hours—or as long as 12 hours—turning once or twice.

Tina’s Tip: I like to marinate the steak for at least 12 hours and usually 24 hours.

This entry was posted in Meat, Recipes and tagged Beef, Dinner, Recipe. Bookmark the permalink.