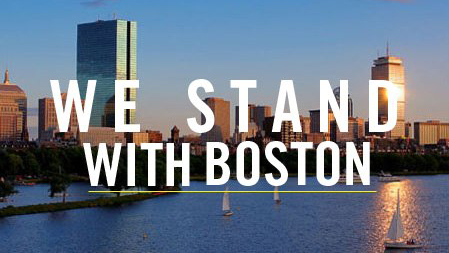 By now, most of you who know me already know that I am home and unharmed from the Boston Marathon bombings. It has taken me a while to process everything and to reach a state where I am able to write about it.

It’s hard to believe the outpouring of concern that I, as well as everyone who was in Boston, received from friends, family, clients, and complete strangers.

Where was I? I finished the marathon with my friend Maureen in a time of 3:45.29. Not the PR I wanted, but my second fastest marathon. This means we crossed the finish line at approximately 2:10 p.m. or 40 minutes before the first explosion.

Maureen and I slowly made our way through the athletes’ chute, where we received our blankets, medals, food, and fluids. We had just picked up my bag and were on our way to the family meet area when the first explosion went off just a block and a half away. We heard and saw the smoke. Our first reaction—what was that? By the second, Maureen was ready to get out of there.

I insisted we continue around the corner to meet my friend Carrie, who had my cell phone. By the time we pleaded our way through the security/volunteers. Carrie was not there. Maureen had the forethought to ask a nice gentleman if we could use his phone. She called her sister, and I called my husband. Keep in mind that at this point neither we nor the people around us knew what had happened.

Maureen left to meet her sister, and within a couple of minutes, Carrie arrived with my phone and dry clothes. We were elated to find each other and anxious to get away. At this point, medics, police, and all sorts of first responders with empty wheelchairs were making their way past us. I recall seeing only one person get wheeled back past us and thinking “how odd—why was a spectator in a wheelchair” (he looked unharmed).

When we made it one more block to the finish line chute, that is when I knew something was very wrong. I looked toward the finish line, just a block and a half away. The road was free of athletes, volunteers, or anyone. All that remained were discarded banana peels and cups. No runners were crossing the finish line.

My first thought was of my dear friend and running partner Polly, who had started in the third and final wave of the marathon at 10:40 a.m. I knew her pace of 3:56 would have put her finishing close to the time we had heard the explosions. I called and texted her sister and brother-in-law. No response. She was also here with her husband and teenage son, who could have been watching from the finish line.

By this point, it was impossible to get a phone line out of Boston. Even texts were having a hard time getting through. Carrie and I made our way over the 1.5 miles to our hotel in the North End, constantly stopping to send or receive texts from people as the news of what had happened at the marathon made its way across the country and the world. During this time, I learned that Polly and her family were all safe. What a relief. I was also able send a text to my brother Kelly in California asking him to call my mom and dad in Washington and Montana.

I distinctly recall being at Government Center when my phone rang. It was a client. Hesitantly I answered. First thing she said: “Thank god, Tina, you are alive.” We still did not know what had caused the explosion, but we had heard from a friend of Carrie’s that it was a transformer. I asked my client what had happened, and she told me it was a bomb. I did not want to believe this. I got off the phone to continue to contact my family or at least try.

At that moment, a group of three men near us were discussing a video they had seen on their phones. “What happened?” I asked. They said bodies and body parts went flying. I was in shock. Who would bomb a marathon? It had begun to sink in.

Carrie and I made it the final half mile back to the hotel. During the walk I got a call out to my oldest brother, Shawn—my first call out since talking to my husband more than half an hour earlier. I told Shawn there had been an explosion at the marathon finish, but that Carrie and I were okay. Because he was at work in Washington state, this was the first he had heard of it.

Glued to our phones, walking silently together, we made our way into our hotel room. We were in front of the TV for a couple of hours watching the news unfold, texting, and answering the 2-3 calls that actually made it through. Canceling plans with friends. Taking an ice bath with the phone at my side to answer texts.

Unaware of the time, we were starving, and we knew we needed to wander out and get some food. We were two blocks from the iconic Italian district that had been packed with marathoners for the past two nights. On this night, it was a ghost town. The most people we saw were police stationed about every half a block, cruisers sitting ready with their lights flashing.

We went to a restaurant where just the day before we could not get a table; they seated us right away. I had made a conscious decision not to wear my marathon jacket. I was so proud of myself for qualifying and finishing such a premier race, but now I did not feel safe wearing it.

The next morning, Tuesday, we awoke to a beautiful sunny day. Carrie had to leave for the airport before noon, so we packed and set out to find breakfast. It was quiet along the wharf and near Faneuil Hall. We wandered around until we found somewhere that served fresh eggs—it was more of a challenge than we expected. This was not the exploration of Boston that Carrie had anticipated when she decided to accompany me on this trip.

At 11:30, Carrie left for the airport on the hotel’s water taxi, and I stayed behind as my flight was not for several hours. A rowing friend picked me up a couple of hours later, and we hung out along the Charles River, where we felt safe and had many fond memories of the Head of the Charles regatta. Oddly enough, we were just across the river from Watertown.

When we flew out of Boston, I proudly wore my jacket. As a former Bostonian, I am proud of my city, and I want to go back.

My time in Boston was not fast enough to qualify me to return next year—I need to shave 30 seconds off my Boston time to qualify—but even that might not be enough. So many people have now expressed interest in the Boston marathon, it will be a challenge getting one of the limited spots available. I’m determined to qualify in the next five months, however. Registration opens in September, although the Boston Athletic Association (which hosts the marathon) has not yet specified the date. In any case, I need to run a new PR before then.

I have many reasons for returning to Boston, but three stand out: Like all of you, no doubt, I followed the news last week, and as we learned about what happened, it strengthened my resolve to not let a few crazy people ruin my enjoyment of a sport I love. Also, I love the city of Boston, and I have many dear friends who either live there or intend to run in the 2014 marathon. And finally, the marathon itself is amazing! The crowd support gave me chills—people cheering, sometimes nearly 10 deep, for complete strangers for the 26.2 miles. I can’t wait to go back and experience it again. 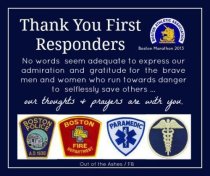 If you are able, please consider helping by donating to The One Fund Boston, formed to raise funds to help those most affected by the bombings.

This experience has given me much appreciate for the heroes—all of the first responders who came to the aid of the injured. Who knows, maybe I will put my biology degree to work and become one as well.

Thank you all for all of your support.

This entry was posted in Running. Bookmark the permalink.

8 responses to “B Strong”