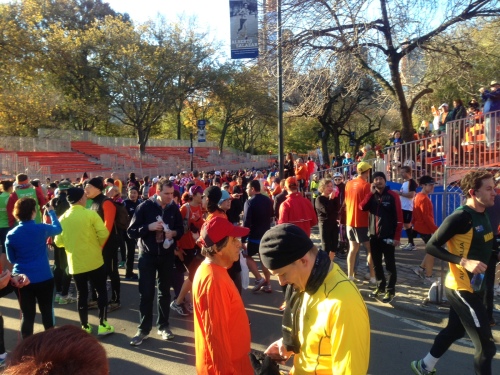 Because I have been a sloth about blogging, some of you may not know that I have completed a few events in the past year, and this weekend I am in New York to make another attempt at the New York Marathon. Nonrunners may have forgotten that it was cancelled last year due to Hurricane Sandy, but I have thought about it many times and have known since Christmas that I was going to return for the 2013 race. (The photo above is Central Park in 2012.)

When I last posted, I was training to run the Onion Man Triathlon in Walla Walla in May (which I did). That race was part of my training for a bigger goal: to complete my first Half Ironman. I had my sights on the Ironman 70.3 Calgary in July.

After completing the Onion Man, it became apparent I had my work cut out for me. Having spent months preparing for the Boston marathon, I was all set for the 13.1 miles I would need to run in the Half Ironman. It was the 56-mile ride and 1.2-mile swim that had me concerned.

With just 8 short weeks between the Walla Walla event and the one in Calgary, I would need to buckle down, get on my bike and in the water. The training was exhausting. You might not know this, but each leg of the event has time standards. Each participant has 70 minutes to complete the 1.2-mile swim, and must finish the swim and the bike ride (56 miles) in 5 hours. Competitors have to complete the 1.2-mile swim, the 56-mile bike ride, and the 13.1-mile run (the entire course) in 8 hours. If you don’t hit any of these time limits, you are pulled from the course and not allowed to continue.

I had no doubt I could make the distance, it was the time cutoffs that had me worried. I am not a strong swimmer or cyclist, and Calgary is one of the most challenging Half Ironman courses, due to the starting elevation and the numerous hills.

I completed my goal of a Half Ironman covering 70.3 miles in just under 7 hours. The event was great. I would do the distance again, but next time with a bit more training. 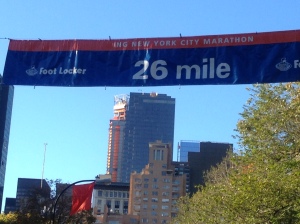 Since July, I have been focused on the New York Marathon, scheduled to take place this Sunday, November 3. My bib number is 21211, and if you’d like to follow my progress, check out the marathon website.

it won’t look so empty this year.

I’ll let you know how it goes on Monday!

This entry was posted in Running. Bookmark the permalink.