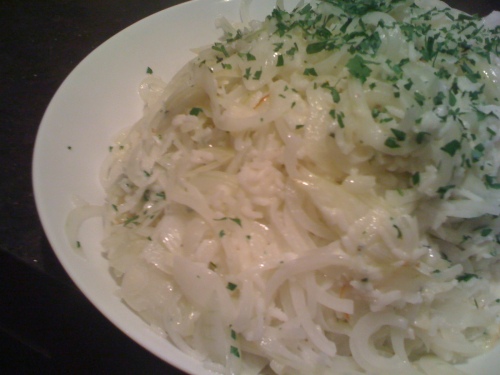 I was first introduced to this dish in the mid-2000s by a client who requested it for a dinner party. At first I was skeptical–as are most people who are unfamiliar with the dish, I’ve learned–but once I tried it, I was amazed at the flavor.

Without adding any additional liquid, the rice becomes tender simply by absorbing the moisture from the sweet onions.

According to the dictionary, soubise [soo-BEEZ] is “a brown or white sauce containing strained or puréed onions and served with meat.” I like to serve it with beef or chicken. It goes well with braised beef brisket, for which I will post a recipe shortly.

Give it a try and let me know what you think.

Slice the onions thinly in rounds, against the grain. I do this with my chef knife but you may also use a food processor or mandoline.

Bring 1 quart of water and 1½ teaspoon of salt to a boil. Add the rice and cook for exactly 5 minutes. Drain the rice and set it aside.

In a 4-quart sauce pan melt 3 tablespoons of butter until it foams. Add the onions and toss, thoroughly coating onion slices with butter. Stir in rice, remaining salt, and pepper.

Pour onion mixture into the buttered casserole dish. Cover and bake in a 300-degree oven for 1 hour. Just before serving, stir in 2 tablespoons of butter, the sour cream, grated cheese, and parsley.

This entry was posted in Pasta & Grains, Recipes, Side dishes and tagged Recipe, Rice, Vegetarian. Bookmark the permalink.